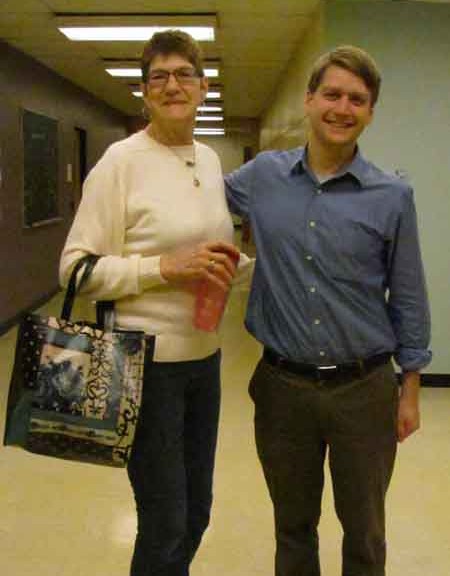 Alice has finished 50 per cent of intensive speech counseling.  My partner in life began speech therapy on Jan. 4 at Portland State University (PSU), and my hard-headed woman has less than four weeks left.

We were anticipating professional guidance once we learned Alice qualified for the highly regarded research program, and, like a prized racehorse, she was chomping at the bit to get started.  Communication has become Alice’s nemesis, especially when a critical word gets lost in the translation from thought to speech.  Consequently, her frustration shows and builds.

Communicating is vital to intelligent beings, so Alice’s word-block syndrome takes a toll on both of us.  While waiting for her two hours of therapy downtown to end, I sat on a wooden bench waiting for Alice to appear.  Three weeks ago, though, a kindly professor took pity on my aching posterior and showed the way where a nearby cozy waiting area with cushioned chairs invited this weary interloper to ease those sore buttocks.  Ah, relief!

The wait affords me this opportunity to chronicle her progress, because whenever we’re at PSU, I cannot Uber.  However, on alternate days, Alice’s speech therapy is handled at our apartment.  Wesley Allen, therapist extraordinaire (shown above), gives intense one-on-one sessions at aphasia sufferers’ homes and at PSU.  The home sessions are extremely helpful to Alice and free me to drive for Uber and keep the financial ogres away, although writing takes a back seat to chauffeuring skills.

Researchers at Portland State University’s Aging and Adult Language Disorders Laboratory joined forces with the University of Washington’s Aphasia Lab to offer hope to sufferers of speech aphasia.  Researchers want to understand more about aphasia and its related communication disorders.  Alice’s participation not only helps her own recovery; it provides signposts for speech therapists who treat subsequent stroke victims.

Because I haven’t written in two months, it’s important to report that Alice, Millie and I spent a pleasant holiday season.  Close friends and family received our traditional annual photo with Millie around our grown-in-Oregon Christmas tree.

On Christmas Day, we once again celebrated as if we were Jews.  We went to a movie and intended to eat at a Chinese restaurant.  However, the Living Room Theaters in downtown Portland served so much fine cuisine and wine at plush seats where we watched “The Big Short” (which we wholeheartedly recommend) that our appetites were summarily squelched.  Therefore, Chinese food was postponed until a week later.

I worked almost all day/night New Year’s Eve, prior to an unexpected invitation from friends to party hearty at their house less than a mile away from our apartment.  We arrived half an hour before the clock struck midnight, and were treated like guests of honor.  After some moderate drinking and smoking, kisses of congratulations were shared all around after the TV channel of our hosts’ choice showed the Times Square ball drop (on a three-hour tape delay).

Alice and I stuck around until 2 am.  By the time we made it home, we didn’t fall into bed until 3:15.  That equates to 6:15 am on the East Coast, so Alice and I became born-again party animals.  What’s more, my cousin Margaret invited us to partake of a New Year’s Day sumptuous ham dinner joined by her offspring Brantley, Rori and Lauren.

It’s a good thing I worked New Year’s Eve, because the night of Jan. 2nd and the next morning this part of the Great Northwest was hit by 1-3 inches of snow and ice.  Portland doesn’t salt its roads, claiming the product — used liberally in the rest of the country — is bad for the environment.  Consequently, an outbreak of wintry precipitation shuts down sensible highway travel.

East Coast transportation is similarly affected, but only after the two-feet-plus snow event that buried the Northeast, including our friends in Doylestown, Pa.  And oh, does Alice gloat!  I suppose enduring a $400-plus monthly electric/gas bill for numerous years can do that.

Yes, Alice and I have reasons to embrace our newfound Portland life, but we are extremely wary of the explosive rental market and what a new lease on our modest apartment might entail.  Nevertheless, we are optimistic about our prospects (at least most of the time), and Alice might surprise us all by going back to work.  More to come!