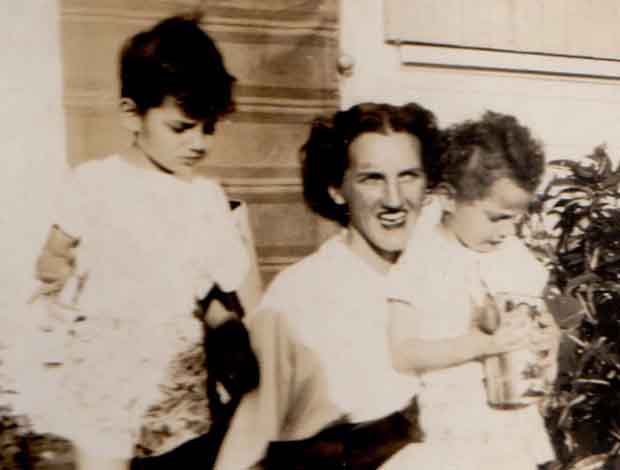 A few days after the visiting nurse showed up, so did Daddy and Mother [Mason and Grace Brantley Johnston].  How they maneuvered their way by subway to our apartment from Penn Station mystified me.

Virgil returned home at the end of his tour – five or six weeks after Mason’s birth.  I do not remember if he telephoned any time while gone, and I know he didn’t write.   When he returned home, he bought groceries, paid bills, cooked and worked “club dates.”  (They call them “gigs” nowadays.)

My recollection of events for several months is out of sequence, but that summer Virgil joined Bob Rose’s orchestra on tour.  When they left, I listened to them on the radio with their theme song “Holiday for Strings.”

That fall, around late October or early November, Virgil joined Carmen Cavallaro’s band on tour to Miami.  As the Christmas season set in, I brought Mason to Mother and Daddy’s house in Alexander Park in Portsmouth, Virginia.  In order to join us there for Christmas, Virgil quit the band.

Virgil and I still struggled financially, so I continued my holiday stint at Belk’s Department Store in Portsmouth under the affectionate but watchful eye of Aunt Queen Brantley.

I became pregnant again in early January 1944.  During the summer, Virgil got a job at Grossinger’s in the Catskills.  Grossinger’s was a Jewish resort for New York Jews to escape the City’s oppressive heat.

I gave Mason, only 15 months old, to Mother and family while I joined Virgil at the high tone resort.  Virgil was considered a “sideman” (trombone) and performed with the standby house band, comprised of 15-16 members.

Among the acts I best remember were Jimmy Durante, Luci Arnaz and Milton Berle, whose mother was a guest.  Although Virgil and I had a room “off-campus,” our entire day and night was spent at the hotel, including all meals.  I was most impressed by the breakfast chosen by overweight gentlemen: sliced bananas covered in sour cream.

Nightly, once entertainment was over, the musicians played poker with guests.  In the afternoons, Virgil taught me to play canasta, gin rummy and 21.  I didn’t know it at the time, but Virgil told me I played Milton Berle’s mother once I learned to play.  Virgil also took me out on the resort’s lake, with him doing all the rowing.

Our blissful stay ended prior to Virgil’s contract expiration when he bitterly complained that the musicians’ promised menu didn’t match the guests’ one.  Virgil quit in a huff, and we returned to our New York apartment where he took numerous club jobs.

On Sept. 4th while going to the bathroom, my water broke.  Virgil took me to Roosevelt Hospital, where I lay in a bed with nothing else happening.  After staying overnight, hospital staff planned to send me home; then at 2 pm, I went into labor.

A dry, arduous exercise ensued and continued through the night of the 5th.  The next morning, the doctors pronounced the baby should be taken from me.  With little more elaborate equipment than ether for me and forceps for him, Jonathon Virgil Loika was delivered.

He appeared covered with hair like a monkey, weighing just under four pounds (but soon less than three), and was placed in an incubator.  Doctors told me I could feed him my milk, but then brusquely brushed off the effort by saying, “He turned blue.  It isn’t likely he will live.”

I was released to go home, and Jon stayed in the incubator.  Soon my sister, Grace Wiley, brought Mason back from Portsmouth.  Finally, I received a call from the hospital in November urging me to take Jon home, that he will die otherwise.

He has hematomas, I was told.  “If he lives, take him to the hospital for their removal.”  Jon needed to be fed every two hours around the clock.  After six weeks, his constitution improved, and he appeared very much alive and seemingly well.

That’s when I took Jom to Sloan Memorial to have the hematomas burned off with, as I was told, dry ice.  Jon cried in pain and agony afterward until the day before his next scheduled treatment two weeks later.

The heart-rending pain and agony returned like before.  His regimen remained in place for 12 weeks, before becoming once a month, once every two months and finally once every three months.

That’s the troubled way Jon came into this world.