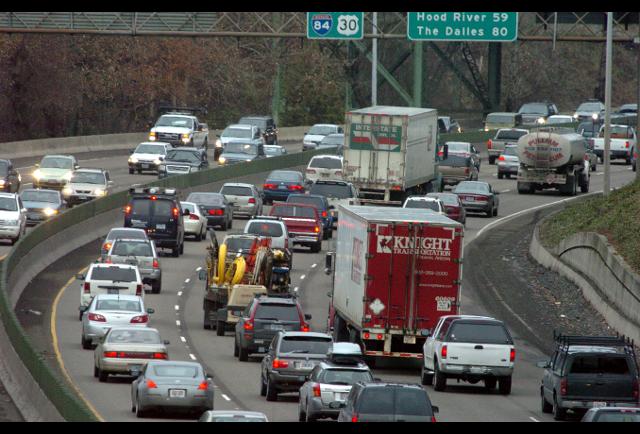 Since Alice and I arrived as mid-Atlantic transplants to the Left Coast almost three years ago, driving around, through and beyond Portland has revealed a downside of the Rose City.  Over 600,000 of the city’s residents – over 2.3 million are cramped inside a flexible, but meticulously zoned, metro area – populate this formerly pristine forested area. Many locals reveal a thoughtlessness attendant to litterbugs who discard fast-food trash and cigarette butts carelessly.  Franchised McDonald’s and Burger Kings are high-stakes fixtures to some of the worst body shapes we’ve seen in America.

“Portland is the fastest growing metropolitan area in the country,” say a myriad of surveys comparing growth here with the rest of the country.  City administrators wring their hands about a town that grew into a city and now create “zero-death” goals, because driver impatience or carelessness no longer resolutely yields to pedestrians and bicyclists.  Freeways have become obsolete, because of bumper-to-bumper traffic on all roads leading into and out of downtown.  City fathers and mothers speak openly about charging everyone a mileage toll for driving on city streets, enforced by mandatory GPS counters.

Homeless beggars jockey for freeway exits to display their homemade signs pleading for money.  Buildings sprout upward at an astonishing rate, with new construction closing lanes around almost every block.  Artists and people on fixed income complain about being priced out by the workers from high-tech industries, the two largest being Intel Corp. and Nike.

Most bridges across the Willamette River that bind the East and West sides together are always under construction in one form or another, as a nonstop crush of trucks, cars and buses steadily pound the newly added improvements into submission.  Portland’s traffic ranking is worse than Philadelphia.

Driveways inside apartment complexes as well as residential streets are pocked with speed bumps, serving as automated enforcement of sensible speed limits.  Portland police do not have the manpower to enforce restricted lane-changing.  The turn lanes of downtown roads onto stop-and-go freeways outgrew their capacity years ago, and there is no room to add new infrastructure to accommodate exasperated recent arrivals.

The TV series “Portlandia” reflects the Chamber of Commerce image of the area; it serves as “Fake News.”

I have seen the urban side of the Great Northwest here, and the future doesn’t portend well.  As an Uber driver over two years, I shared Betsy, our 2010 Ford Escape, with almost 3,000 riders and now realize this West Coast enclave has capitulated to the millennial nerd rush from Silicon Valley, California.  With matching prices to boot, greed rules the mindset of today’s landlords and homeowners in the Rose City area.  Alice and I are struggling to keep up with rising rents in our complex adjacent to a busy freeway.  And visitors from Seattle, Los Angeles and San Francisco say it’s even worse there.

Here’s the good news: We found a place that would accommodate us nicely and not flaunt our presence.  Two weeks ago, we made an offer to buy a two-story townhouse (listed as a condominium) in a quiet neighborhood 40 miles from Portland, where the unfettered sound of freeway traffic, police and ambulance sirens will become an unpleasant memory.  I will not elaborate more yet, because we await word from the Veterans Administration to see if we qualify for a mortgage with no money down.

We do not wish to jinx our prospects, because the universe is working on our behalf.

Now it’s time to savor our reclining years.  It’s also time to get off my duff and write a book in earnest about my life.  Because Betsy’s air conditioning system is scheduled for repair on July 17, I will have time, albeit involuntary, to reinvigorate my creative juices.  Alice will also feel more independent with the car at her disposal.