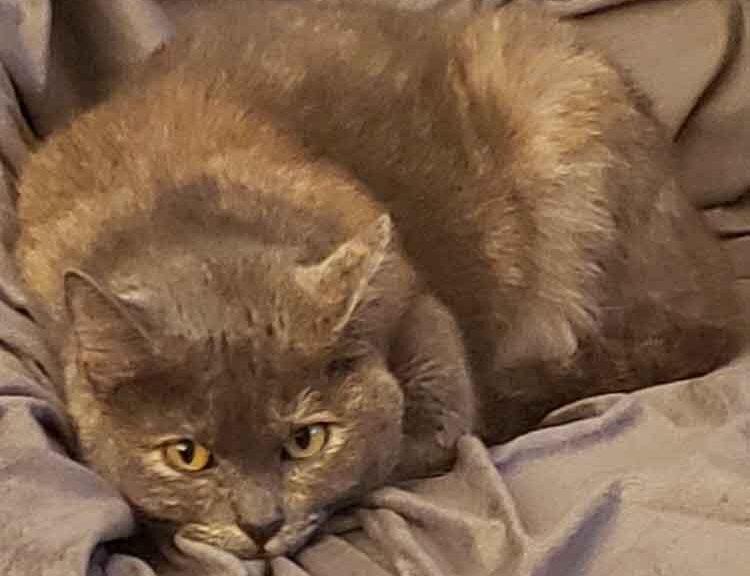 One thing about undergoing grief; some moments stand out more than others.

Take the matter of a tortoise-shell, short-haired cat named Chloe.  With incredible claws.

She turned out to be praise-worthy, where once upon a time she looked scraggly, barely alive.  You can read this website’s story about her adoption using the link at the end of the previous sentence.

For nine months, Alice adopted, fed and nurtured, brushed Chloe’s coat into something astounding, guided her bathroom habits toward the litterbox, and instructed the cat never to tip me off about how she was going to use our new, semi-plush carpet.

In that time, Chloe became a fully grown cat under Alice’s tutelage, and was taught “not to care.”

Then Alice passed over.

Almost from the outset, Chloe began performing her version of Mozart’s Urine Sonata.

Within two weeks, she awakened me by peeing loudly in the bedroom. On previous mornings, I discovered bathroom throw rugs tossed askew while I made morning rounds. Maybe I need to change all the kitty litter in the upstairs bathroom, I thought, so I took pains to make the litterbox immaculate.

Chloe took this gesture the wrong way. The very next morning, she shit on the bedroom carpet next to the window curtains. My eyes opened wide, I went ballistic and explored an option I previously considered blasphemous: take Chloe back to the same place where we adopted her, the Humane Society of Cowlitz County.

To understand the depth of my anxiety, readers need to consider my second wife. For 22 years, she became the woman with whom I intended to spend my life. We met in Miami in the winter of 1980 while I was attempting to get the city’s Bicentennial Park renamed in honor of John Lennon.

I was devastated by that tragedy. The night Lennon was shot, I was listening to the Miami Dolphins game against the New England Patriots in the Orange Bowl when an announcer breathlessly interrupted the lengthy commercial break after the third quarter to report John Lennon was shot and had died. When the broadcast feed of the game returned to the stadium live, it was impossible to tell.

As a Lennon admirer, my would-be partner stood by my side during a public show of grief, so I married her.  I also married quickly, because I needed to heal from Wife #1, but that’s another story.

Wife #2 was carrying some work-history baggage, though, relating to animals.

She worked as a secretary at the Humane Society of Greater Miami where more than 90 percent of its intake animals were euthanized on site.  As much as I asked her about that time in her life, she would shut down and give few details.

Back in the 1970s, Miami’s Humane Society became a dumping ground for unwanted animals where an onsite gas chamber was in frequent use. I visited the facility twice and felt an overpowering sense of doom walking past cages of desperate animals that sensed the Animal Holocaust awaiting them.

(A San Antonio reporter’s 2004 visit to that city’s Humane Society shelter is comparable to conditions I witnessed in Miami. Read that report here, if you have an ironclad stomach.)

Could I possibly be delivering Chloe to an unspeakable end of life? What kind of animal would do this?

I worried, frantically speaking at length with good friend Kailey Cox Wednesday night and cousin Margaret Thursday morning. I explained at length without saying what animal shelter care was like in Miami. Instead, I seriously castigated myself on the phone, imagining the worst possible results of an encounter at the Humane Society of Cowlitz County.

At 11 am on April 16th as I walked toward the Longview entrance, Chloe and I were intercepted and steered to a side door for cats, when another staff member in personal protection gear guided us back to the original entrance, and my heart sank.  These people are desperately confused, I thought, and everything inside was going haywire.

Carrying Chloe within her cat carrier, her woeful howling announced our entrance. Tears were creeping out of my eyelids, and I peered around my coronavirus mask.  We were “socially distancing,” but I thought how damned inappropriate it was to be “social” around would-be executioners.

How inaccurate my apprehensions turned out to be!  These folks were here because of love for animals. The Humane Society of Cowlitz County turned out to be an adoption center where virtually all animals wind up being adopted by locals. The revelation I discovered yesterday is each Humane Society can be as different as night from day.  It’s characterized by its citizenry.

Looking at the sunny side of life, Chloe is on the verge of becoming the ideal outdoor cat within the same wild environment in which she survived, gave birth and was neutered before Alice and I adopted her in a condo development prohibiting outdoor cats. Alice brushed her daily and treated her like the queen both of them were, and Chloe grew fat in respect and stature.

Chloe’s aptitude for barn use is off the charts. She can dispatch all kinds of critters with her uncut sharp, long claws, and she knows how to be wary in an environment of bear, cougars and maybe Sasquatch. By being adopted with Alice’s constant care, Chloe’s warrior royalty should be at its prime.

Inside the Cowlitz County’s Humane Society building, I could not have been treated better – and neither could Chloe – by hard-working, blue-collar ladies who live by a no-kill policy, except for creatures at death’s door.  So now I feel an amazing sense of relief, colored by the firm, yet gentle, way I saw its staff handle animals.

Have fun, Chloe. I’ll miss you, and so will Alice.

But somehow, I suspect I might miss Chloe more.

Members of the Aphasia Network have begun a GoFundMe page to support me during the time ahead. To see their message and hopefully donate, follow this link Alice was amazing 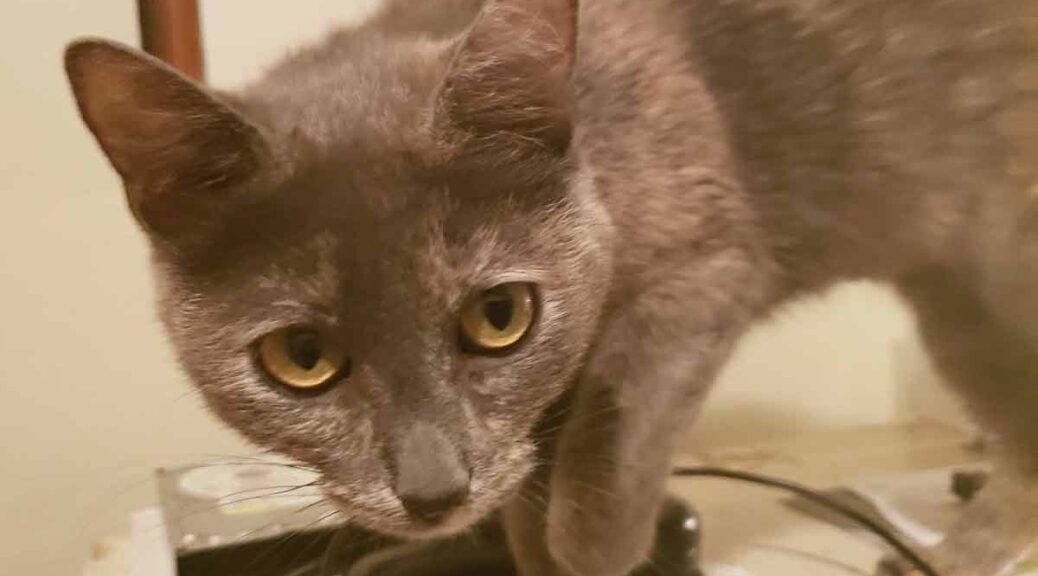 Three weeks ago, Alice fulfilled her prophecy and adopted another cat.  She included me in the adoption process to represent our eight-year union as worthy of the necessary commitment to make an addition to our family.

The photo above praises Chloe, whose name was gifted by the Longview Humane Society.

Isn’t she gorgeous?  Chloe immediately bonded with each of us separately and together.  However, Chloe’s litterbox training is still a challenge to Alice’s persistent, watchful eye.

We don’t know how old Chloe is, because her physical being is stunted by time spent in the untamed areas of Washington where she incurred a pregnancy and gave birth to an unknown number of kittens.  After the Humane Society received her into its protective custody, she was spayed, and treated for worms and other native, tiny varmints.

During her time in the wild, Chloe must have known terror; nevertheless, she appears to be a loving animal.  I discovered this when she first rubbed up to me.  Once feeling my caress, she lay down, purred almost desperately and invited me to rub her tummy.

Whenever I’m away, Alice now has a companion to call her own, and any jealousy I might feel about their kinship is quickly erased as Chloe cuddles up to me when we retire for the night.