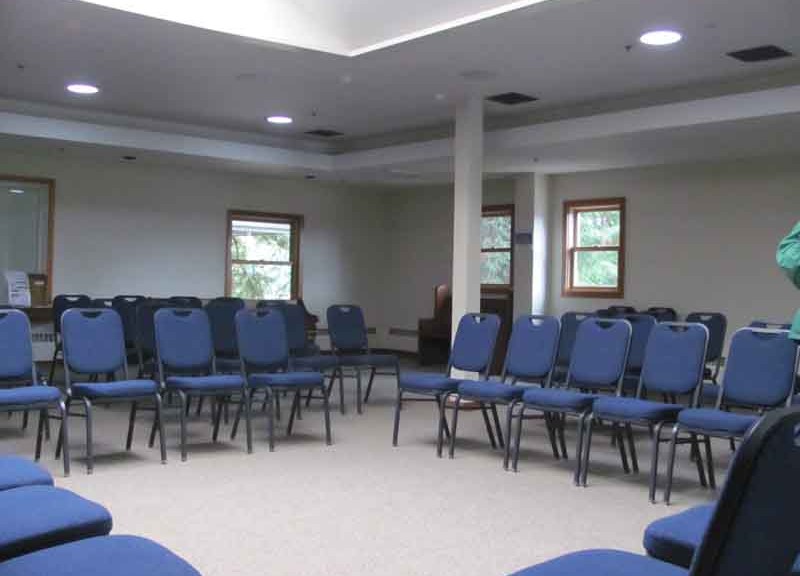 Life is full.  Life is busy.

Often times I utilize those maxims to defend my reputation as a writer, since I’m not prolific.

But why do I not constantly spill forth with new work?  Do I use my uncertain life to avoid rigorous discipline?

These are some of the questions I bring to the table when I practice meditation.  Privately, I meditate subconsciously many times throughout the day.  But publicly, I celebrate the practice by joining Portland Friends on Sundays at their Meetinghouse at 4312 SE Stark Street.

The Quakers there utilized the inspiration of environmental awareness to create an ideal physical structure for thought, simplifying meditation into one uninterrupted hour.  They inadvertently defined a format that pleases this former East Coast practitioner.  Their Multnomah Quaker Meetinghouse worship is centrally located outside Laurelhurst, easily viewed as Portland’s longtime, elegant neighborhood, at 4312 SE Stark Road.

Describing the building is to wonder whose inspiration was responsible for its marvelous ambience, because the room for worship is centrally located on the second floor beneath a spacious skylight.  Mature trees surround the building, so once you’re settled into silence, you experience the sense of being inside a forest at daybreak.  Circular shafts of modest diameter funnel a wealth of natural light from the ceiling.

During the darkness of Portland’s rainy season, Quakers use electric light to enhance a feeling of comfort.  Personally, I prefer dimness as the sun rises, but I grudgingly admit it might be more welcoming for newcomers to walk into a lit room.

The service starts at 8:15 am, embarking immediately into a full hour of “silent worship.”  Once the silence is broken by the facilitator’s “Good morning, Friends,” participants sit in a circle and, proceeding clockwise, are invited to speak about what was experienced during the hour of silence that passed.  Next, each person speaks about holding someone or something in the Light.  Finally, all congregants stand and establish physical contact by joining hands in the circle, maintaining a palpable moment of silence.

Then it’s over.  Nothing else needed.

Dress is casual.  If you’re new to the practice, Quakers use posted queries to initiate or guide one’s meditation.  No one sits on the floor in a lotus position; sitting in a chair is de rigueur.  Even though queries are posted around the room, no minister or leader tells you what to think about; they tolerate the freeform meditator that I am.

Weekly attendance I’ve seen varies from as few as 10 up to 30 people.  Those who participate in this early morning service seem to be likeminded folk, and the repartee experienced is uplifting.

For those who live on Portland’s west side, or prefer meditation with more traditional Buddhist trappings, the Universalist Unitarian Community Church of Washington County, 22785 NW Birch Street in Hillsboro, offers a one-hour practice at 8:30 am in its parish house fireplace room.  Those sessions occur every other week, though.

Be forewarned that Multnomah Friends proclaim themselves as Christian.  However, their meetings on Stark Street are “unprogrammed,” meaning they don’t evangelize openly.  Also, some Friends eschew Christian theology altogether, revealing a penchant for agnosticism, or even a shaky atheism.  Their self-led spiritual practice exudes a myriad of beliefs, since  these Friends let their inner light speak for itself.

Meditation at the Quakers’ Meetinghouse is a blessed way to begin the week.  And I leave the service feeling refreshed and at peace, which is what, I suppose, Quakers promote.

It certainly qualifies as a low-key way of feeling glorious.