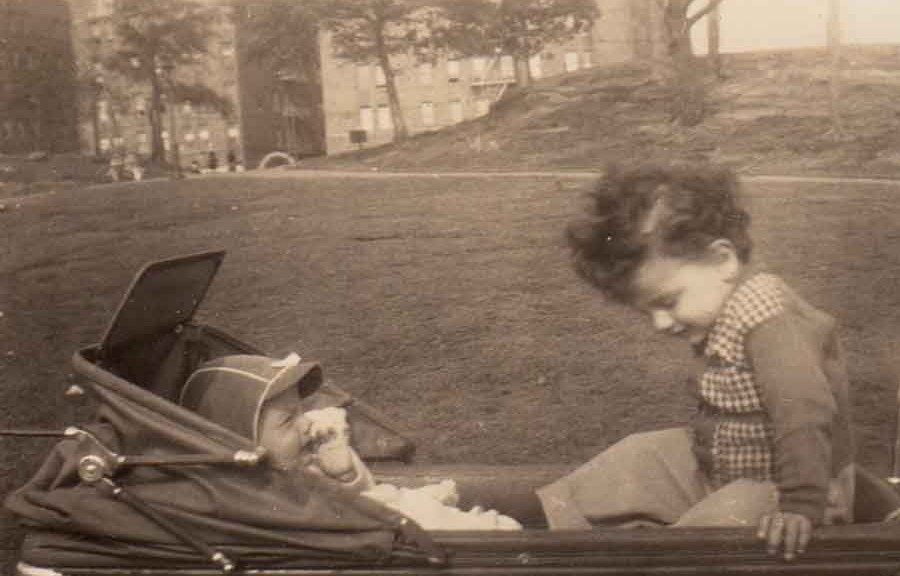 The Wars in Europe and Japan finished.  New York City celebrated with ticker tape parades, but Virgil felt the city was no place to raise children.

Miami was the best place to relocate, he believed, and the musicians’ union there required only a six-month waiting period in order to work.  (Los Angeles required two years.)

In preparation to move, Virgil began several months’ apprenticeships in the kitchens of New York’s best hotels, putting in two, three and four weeks at a time in the Ritz-Carlton, Plaza and the like.  He served as a butcher at one, a sous-chef at another, and functioned as an understudy at the Waldorf Astoria.

The meals he prepared for the family at home were sumptuous.  Around July, Virgil went to Miami to prepare a new life for us.  Because of the union’s waiting period, he got a job at Piccolo’s, an Italian restaurant on South Beach, and soon became night chef there.

Virgil looked for housing but immediately discovered an incredible dearth of living quarters.  I do not recall hearing about any trailers; maybe they had not been invented yet.  But I do remember that people were living in all kinds of makeshift, ramshackle places.

For weeks, day after day, Virgil searched for something he could afford.  Finally, he found a converted chicken house in Homestead, owned by a Mrs. Estell.  Built of concrete blocks and bare concrete floors, our future “apartment” consisted of only two large rooms.  One room was to serve as our kitchen-dining area; the other, the bedroom.

Meanwhile, I took Mason and Jon to Daddy and Mother’s [Mason and Grace Johnston] house in Alexander Park, a public housing division built during World War II, located in suburban Portsmouth, Va.  Oh, how many times they helped us out – so generously – in countless ways.

Once Virgil assured me he had secured adequate housing, I left Mason and Jon with my folks and returned to New York to arrange for critical furniture to be shipped to our new address in Homestead.  Also, I had to sell the sublet apartment.  (Rentals were frozen at pre-war levels, and people paid good money to sublet at those prices.)

Within a week, my New York mission was complete, and I returned to Portsmouth to pick up the boys, board a Seaboard train destined for Florida.  The kids slept in bunk beds (upper and lower), and in almost 24 hours we arrived in Miami at 5 pm.

Stepping off the train, we walked into hot, soupy conditions unlike anything I ever knew.  And looking around, no sign of Virgil!  After what seemed like hours, he met us in a taxicab and took us down Biscayne Boulevard, surrounded by waving fronds of royal palm trees lit up by a myriad of street lights.  It may have been the magical sight that Virgil wanted it to be, but I was too tired to enjoy it, especially with the hot, heavy, wet air.

Then came the bus ride – about an hour – to our new “apartment.”  But nothing had been prepared for our arrival.  Beds were not put together.  No food was ready.  This was a disaster!  We put things together as best and fast as we could before collapsing sleepily without supper.

Prior to our arrival, Virgil had quit his job at Piccolo’s, securing in its place a job with two guys who planned to open a new restaurant in Homestead.  Virgil’s responsibility was to outfit the kitchen and dining room, and he took frequent bus trips to Miami to buy all that stuff.

Our “apartment” was situated a little over a mile from the heart of Homestead.  “Town” consisted of only three blocks of Maim Street, and I lost count of how many times Mason, Jon and I walked there together.  Many times, we found it necessary to catch a ride with Mrs. Estell on those occasions she went for groceries and necessities.

Memories of the August and September heat in Homestead remained with me.  So did the endless fields of tomatoes growing in marl, highly prized as fertilizer, and rocky dirt.  Those tomatoes grew and ripened at Christmas time, along with strawberries, as the winter season came and went.