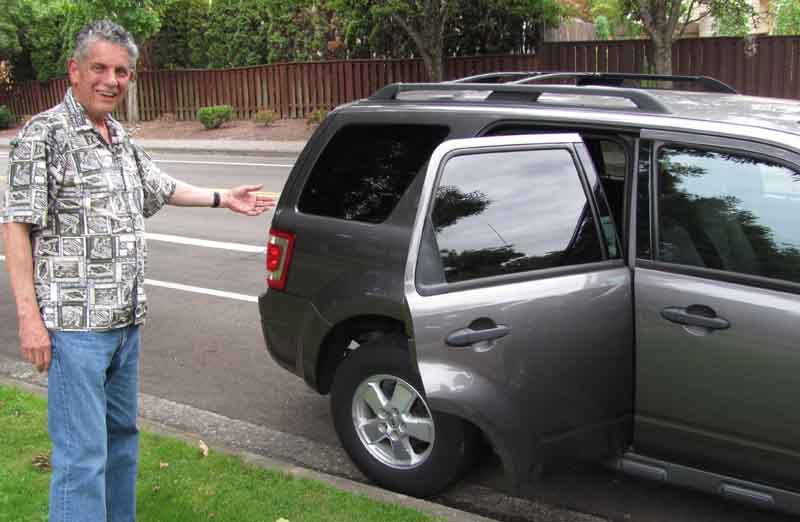 Five weeks ago, I began Ubering.  I take fares to, from and around Portland, Oregon in the 2010 Ford Escape that Alice and I maintain in peak mechanical condition.

In order to drive for Uber, I was subject to an extraordinary background check.  Although I have no criminal nor sex offender record, my application did not pass muster for over six months.

Why?  There was a problem confirming my out-of-state driving record.  Over the seven years I chauffeured upscale VIPs for limousine companies in the Philadelphia suburbs, I prided myself on a clean driving history.

After much gnashing of teeth, my Pennsylvania record was checked, and I became a bona fide Uber driver.  [A company named Checkr still has problems with my clearance.]  I observe Oregon’s rules of the road religiously, constantly checking for bicyclists and pedestrians while shepherding a host of passengers.  I no longer wear a suit and tie, nor do I subsist on starvation wages.  Heavens to Betsy, I wear jeans!

If not for Uber, the financial situation for Alice and me would have deteriorated into catastrophe.  My preoccupation remains a deft juggling of available funds.

Portland’s city planning and roads appear futuristic, many with multilane turning options.  Light-rail rapid transit trains for a system popularly known as the “Max” are a mainstay for commuters.  Truck-driver unions are not as strong as back East, so it’s usual to find tractor-trailers on the road on Sundays and holidays.

Portland’s City Center is ringed by freeways, so where Interstates 5, 405 and 84 converge, along with the US-26 multi-lane freeway, traffic backups test the patience of usually placid Portlanders.  Get in the way of a Portlander with rosy expectations of traffic patterns, and you might experience the underbelly of road rage.

Everyone here is not mellow, that’s for sure.

Before Uber made the local scene, cab companies were a disgrace.  One of my downtown fares related a horror story how he tried to get his mother to the hospital for a follow-up appointment after she experienced a stroke, but with far more dire consequences than Alice’s.

After half an hour, my confidante received a phone call from the cabbie who apologized that he could not pick her up for another two hours.  Two hours!  Many of my passengers share similar stories of distress before Uber came to Portland.

As I told the Portland City Commission on July 15th, I don’t compete with cabbies.  They’re supposed to specialize in white-knuckle drives.  As a former limo driver, I keep my passengers relaxed and carefree.  That’s what I like to offer as the Uber experience.  “Ride with an author,” I sometimes boast.

Nevertheless, cab drivers and their companies bitterly complain about Uber.  I understand their plight; they are losing money, and rightly so.  With all the technological advances since popularization of the automobile, why haven’t they modernized their systems to head off future competitors?

These days, Uber is revolutionizing the way people travel around the country.  Some tourists candidly tell me they would not travel to this city if Uber was not available.  That’s how happy tourists are with the service.  Mayor Charlie Hales and city councilors need to pay attention.

Through careful oversight of drivers for hire, cities have raised the number of fee categories in ever-burdensome licensing regulations.  The maze of regulations bring in money for the general fund – and in certain cases, slush funds.  Those are two revenue sources that help create opposition to Uber.

Jeb Bush saw the possibilities, though, for accentuating positive change, and as a consummate politician, he jumped all over the issue.

I can’t predict the future.  I have no idea what will happen here in Portland, but I do know a lot of people will be extremely unhappy if Uber is saddled with unwelcome restrictions or kept out of the metropolitan area.  Businesses outside the downtown area as well as familiar hot spots are flourishing as curious sightseers can check them out without the legacy of unreasonable delays.

Uber continues to recruit new drivers, and eventually the market may become diluted, lessening driver earnings.  Nonetheless, a true revolution to transportation has been effected through the Uber cellphone app, and the San Francisco-based company now secures the financial well-being of its 160,000 freelancers, oops, “partners.”

Until a better opportunity arises, Alice’s and my future hang in the balance, along with other Uber drivers.

The night is darkest before the dawn.

After a post headed “Alice Is Out of Work” written ten days ago, darkness enveloped me.  Everything seemed bleak, hence our GoFundMe post.

Ten days since, light surrounds us, and I am ready to remove the GoFundMe appeal.

To bring you up to date, an almost immediate response to our cry for help came from a dear friend in Bucks County who gave a $200 contribution.  Alice and I are overwhelmed by his generosity, and plan to respond in kind by writing a firsthand account of nearby pinot noir wineries.

Writing about wine tours was an idea posited by him a month ago, and his donation should enable us to do a creditable job.  Consequently, once it is written, we will send him an advance copy of the story, because writers swell with pride when earning their keep from readers’ help.

But that’s not the biggest news.  In early November, I applied for a freelance job driving for Uber, but was rebuffed by the background-check company that Uber relied upon to validate application data.

The problem?  That company didn’t check my driving record beyond what existed in Oregon.  Even though I am a senior, I was listed as having less than one year’s driving experience.

Six months after supplying my Pennsylvania driver’s license information, in addition to attaining a Portland business license, vehicle inspection, first-aid kit and fire extinguisher, I finally received Uber certification to go with the logo we pasted on Betsy, our 2010 Ford Escape.

When?  Last week.  It felt like some kind of answer from a nondenominational heaven after wringing one’s hands in desperation.

Are drivers employees of Uber?

Uber is the result of what happens when technology transforms the car-service business.  The product is called ride-sharing, and unlike a judge’s ruling in San Francisco this week, its drivers are not employees.

I set my own hours: not from a company-mandated list of options.  I have full freedom to determine what hours I work, based upon my own schedule, not the company’s.  What employer lets its workforce do that?

What Uber is doing – community after community – is lowering prices.  Limousines are unnecessarily extravagant, considering what their drivers are paid.  And limo drivers work under horrendous conditions, too.  People at CBS News are still mourning the loss of Bob Simon to a limo driver’s blunder.

Taxicabs are pricey, too, and their drivers are not exactly pick of the litter.  Meet a few Uber drivers, and you will be able to make comparisons.

This week, I finished working a part-time schedule as an Uber driver and am optimistic enough to write this update.  Hats should go off to Kaiser Permanente who forgave our entire medical debt; that is a huge help.  We’re currently trying to convince Legacy Good Samaritan Hospital to reduce that bill to half its current size.

Here’s the downside of this good news, though.  Alice brought me to Oregon so I could write more, but writing time will now be limited until debts are brought under control.  I hope to add two new entries to the website each week.

Also, I worry about Alice when I’m not home.  Will a new emergency arise while I’m not there?  How can she let me know something’s wrong?

From a positive perspective, being an Uber driver will help me learn more about Portland and Portlanders.  I can explore the area more, and detail findings on this website.

Thanks for all the good wishes and thoughts.  I wish today’s readers had more resources, considering how easy I am self-critical when the cupboards get bare.  But I accept the improved situation as it currently stands.

Stay tuned.  Considering the quality of readers this website has attracted, new entries will continue to appear.