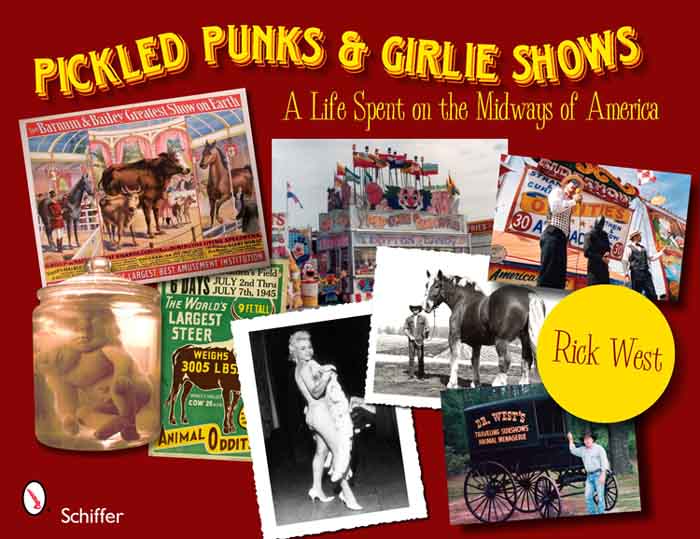 AT&T has managed to incorporate an amazing library into its HBOMax service, but the technological metamorphosis in how we watch television currently is overshadowing the life-changing creative accomplishment of one particular singer: Bruce Springsteen (Alice’s other heartthrob).

Once you locate the movie that Springsteen co-directed with Thom Zinny, “Western Stars” must be seen and heard to be believed. He invited 30 orchestra members to perform his insightful songs inside a spacious New Jersey hay-barn that holds up to 100 people. The acoustics in the barn are top of the line, and my Bose system delivers perfectly. You will notice the “Boss” doesn’t perspire at any time; he is completely attuned to the blend of sound inside the barn.

In the film, Springsteen himself explains, “‘Western Stars’ is a 13-song meditation on the struggle between individual freedom and communal life.

“There are two sides of the American character: One is transient, restless, solitary, but the other is collective and communal in search of family, deep roots and a home for the heart to reside. These two sides rub up against one another –  always and forever – in everyday American life.”

Springsteen gleans insight from his own past behavior, and expresses it in deeply personal songs. None of his words appear inflated; if anything, his inner emotional state appears muted. Although one critic panned it, “Sleepy Joe’s Café” is nothing like the place the Coasters sang about.

If you are over-saturated with the defugalties this country is putting up with, you could do a lot worse than watch “Western Stars,” co-directed by Springsteen and Thom Zimny. You may not jump up and down, but you might shed a tear for an America that is rapidly being lost.

“Western Stars” is available through subscription to HBO/Max or Hulu. It can also be viewed through Vudu, YouTube, Google Play, Microsoft, iTunes, Fandango and Amazon, or purchased at Bruce Springsteen’s website. 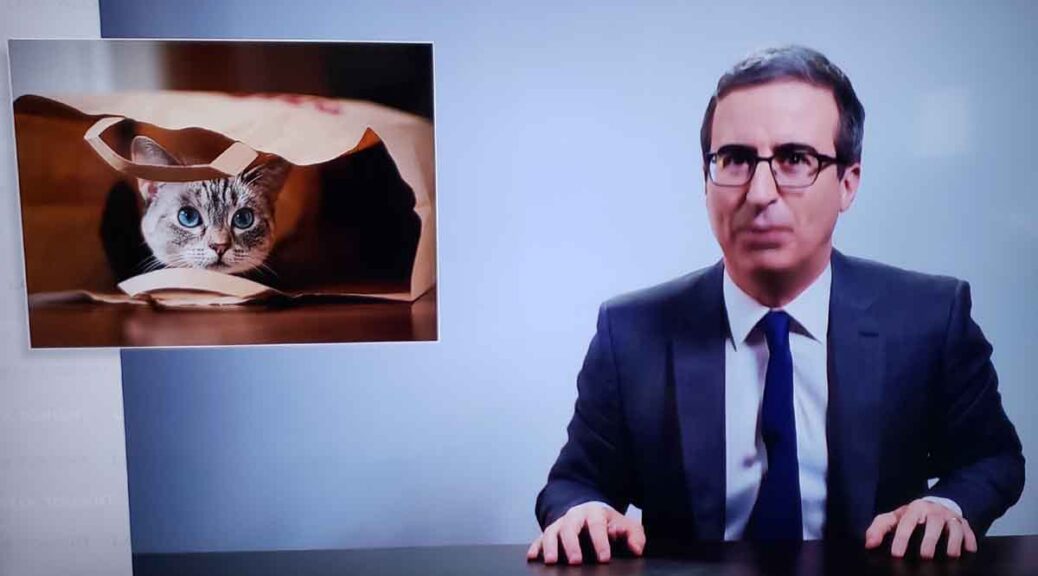 For those who are HBO subscribers, be sure to catch this week’s episode of Last Week Tonight with John Oliver.  (I once worked as a proofreader for The Miami Herald and later became a TV-radio writer for the Miami News.)

Oliver’s 25-minute complaint about bumbling coronavirus strategy is humorous enough, but wait until he moves on to the Sunshine State, entitled “Even during a pandemic, Florida just can’t help but be Florida.”

Oliver relays news accounts of Florida lawyers showing up for a virtual hearing wearing – nothing?!!! Our wacky host shows video of a manatee and alligator not practicing “social distancing,” and finally we learn about WWE – an outrageous wrestling simulation – being declared “an essential business.”

After a hilarious jab at my former home comes the “snapper to the capper,” a tribute devoted to the feline lover, called “Cat TV.” Those ubiquitous pets of ours are highlighted in a segment creatively hosted by TV and movie star Martin Sheen.  Just to recognize their quirky behavior takes us away from this challenging time in American history.

So enjoy that part of the show.  And this friendly TV viewing tip is meant to let you know I’m furiously working on the book.  This time in personal history is an opportunity to capture memories that mean something. 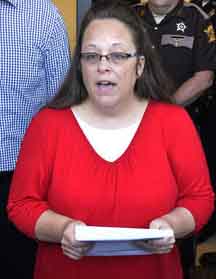 The media is making much of Kim Davis and her old Kentucky homeland refusal to put a legal stamp of approval on “same-sex marriage.”  The U.S. Supreme Court earlier this year ruled what her legal duty should be, but she refuses to recognize her constitutional duty, claiming it violates her moral principles.

Some Republican candidates for President already jumped on this illegal bandwagon, and their agendas pander to fear, hatred and ignorance.  Christians have become split about the validity – and wisdom – of Davis’ behavior, and some officials call upon Davis to resign her $80,000-a-year job, because she chooses not to fulfill the duties of office.

In tear-filled statements, Davis addresses the news media portraying herself as torn between moral conscience and duty.  Is she right to stick to her guns (so to speak)?  More importantly, her professed dilemma personifies the underlying conflict I thought the judicial system had supposedly answered once and for all: That it’s okay for two men to marry.  Or two women.

It’s time to debunk the myths about what’s going on here once and for all.

What is a man?  On a scale of 1 to 10, how much masculinity must a man display to call himself a man?  Is it the image portrayed by the former advertisers of Marlboro cigarets?  Is a man entitled to be strong-willed and, in a disagreement with a woman, always right?

Must a man always behave as a 10 on the masculine scale, always ready to do battle?

And what about women?  Is there a similar scale of 1 to 10 whereby women must ultimately judge herself?  Is a woman supposed to behave vacuously, without any principles other than what her partner defers to her?  To call herself a woman, must she eschew intellectual pursuits in lieu of putting makeup on and finding ways to enlarge her bust?

Of course, we know the correct answers, but that’s only because of this time in history.

Across the ocean, fundamentalist Muslims require women to wear head scarves and cover up any bare skin, thereby obeying Sharia law.  Women in mostly Muslim countries are viewed as subservient to men.  And that, I think, is how civilization may have been once upon a time, or at least that’s the attendant fictional legacy.

In America and other forward-looking countries, women are no longer required to be – or act – submissive.  And men are free to become submissive and adopt what traditionally were thought to be feminine traits.

I believe that when two individuals with identical genitalia share intimate contact, one of them is behaving more like a male, and the other like a female.  They may sometimes switch roles, but that’s the exception rather than the norm.  Identifying two men or two women as a homosexual couple is nothing more than a label to help the rest of the world understand what looks like a same-sex relationship.

Considering the nature of my own relationships with women, I can hardly put myself on the Marlboro scale of a “10,” but neither have I become a “1” either.

People like Davis think they walk a higher moral ground, but I disagree.  Instead, they’re the epitome of intolerance and bigotry.  They justify this aberrant behavior on “moral values,” but it’s more the practice of a longstanding justification to be close-minded and impersonal based upon outward appearance.

We need to stop coddling public servants who are supposed to lead by example, not by ridicule.  I see no love or responsibility in her obstinance.

As men and women, we exhibit different forms of transgender tendencies.  For most of us, it’s not as blatant as those who are identified as the LGBT community at large.  But our affinity to one type of behavior has changed and is more diversified than we realize.

That’s why there’s such a fear of homosexuals or transgender people.  They remind us of dark places inside our own identities or past experiences that cause severe discomfort.

In this country, public officials are here to serve all the people, not just the ones who resemble them. 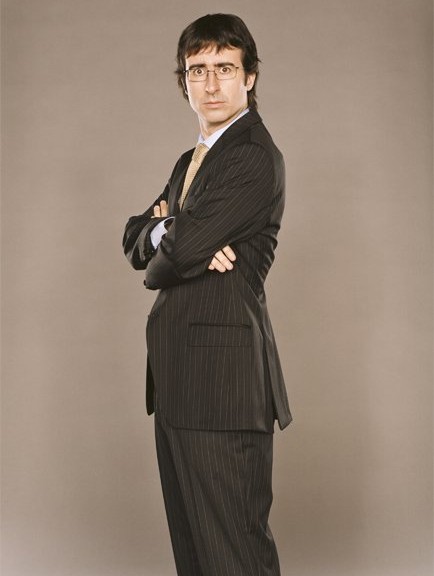