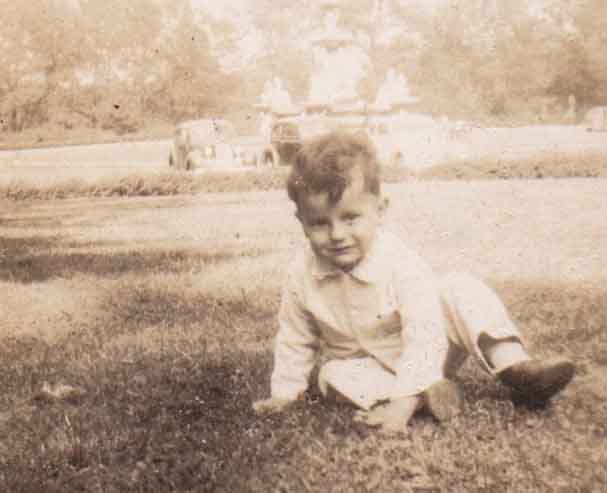 A marriage for me had to be made in a Presbyterian church, but the minister – a Mr. Smith – at the First Presbyterian Church on Broadway required a pre-nuptial conference.  After we underwent the formality, I was ready to call off the whole thing.

However, Virgil bought us each a beer at a nearby pub to calm me down, and I consented to go through with it.  Consequently, on June 14, 1942, we were married.  My sister, Gladys, served as matron of honor.  Everything happened in such a blur I can’t recall whether Horace or Bill was Virgil’s best man.  I do remember, though, that Clara Roesch sang.

After the ceremony, we invited friends to our new sublet studio apartment – somewhere in central Manhattan – but some of them let me know later they had expected more in the way of alcoholic refreshments.

Soon after we married, Virgil and I visited my Johnston parents, Daddy (Mason) and Mother (Grace), in Portsmouth, Va.  Daddy had gotten a Civil Service job in the Navy yard, and they had temporary living quarters in a trailer.  Bless their hearts, they even rented an extra trailer for Virgil and me.

When Mother took me inside to get settled, I confided to her, “I must say I do love the sex part of marriage.”

A joyous grin spread over her face, and she expounded in her inimitable fashion, “So do I!”  Although I was falling in love with my husband, Mother already had been for almost her entire life.

Back in New York, summer proved tough.  Virgil kept checking in at the musicians’ union for available gigs, but found nothing to speak of.  He did locate music copying jobs that were tedious and involved pain-staking, long hours.  (Just imagine what ditto machines and later Xerox copiers achieved since.)

Many musicians of different kinds visited us.  I fondly remember Ezio Creatore, a pianist who played a particular concert at Carnegie Hall.  He possessed a Steinway grand piano in his apartment where he and others often played for us.

I continued working the 11 pm-7 am shift at Western Electric near the Holland Tunnel in Lower Manhattan, an assignment I had taken in January.  The facility served as a defense plant during World War II, where at first, I was blowing glass for special bulbs with a specific military application.  Later, I was assigned to baking special cylinders, or maybe disks, that were used for submarine detection devices.

The summer was hot and dry, and around 2 in the morning, I didn’t know the difference between working and sleepwalking.  Six weeks after our wedding, I became pregnant.  Consequently, I developed a ravishing hunger for bananas, which is why I remember the words of a song, “Yes, we have no bananas.”

Summer turned into October, and our sublet had ended, causing us to move into a dark and dingy studio apartment not far from our old one.  Rooms, however, were large, and concert pianists practiced at all hours above, below and beside our place.  I can still picture Virgil walking up the street carrying my larger steamer trunk on his back when we moved into these new quarters.

However, scarcely a month since we moved there, Bill Mayer related some wonderful news.  A one-bedroom apartment next door to his mother’s place – one floor below his own – had become available in the Bronx.

We needed little encouragement, and I still remember the address: 1980 Unionport Road, Apt. 3A, next to the elevator.  One entered a short foyer, and a large kitchen with dinette appeared on the right.  A spacious living room opened off the entryway whereupon the only bedroom was to the back with an adjoining bathroom to its left.

From our bedroom, we could look out to an elevated subway and a delicatessen below.  Across the street was a large forest that served as the back of the Bronx Zoo.  Only three apartment houses, seemingly all-Jewish, many of whom were musicians, were on the block.  Apart from Bill, his live-in friend Jerry and Bill’s mother, we appeared to be the only “Goyim” (non-Jews) there.

The laundry room was in the basement, and to this day I remember one resident who regularly announced to those whose baskets awaited their respective turns, “My next is next!”

On New Year’s Eve, Virgil had a gig as trombonist in Chicago cornetist Muggsy Spanier’s orchestra.  They were playing Jack Dempsey’s restaurant/nightclub on Broadway at Times Square, and as midnight drew nigh, the outdoor area filled up with revelers.

I desperately wanted to join the crowd, but Virgil put his foot down, “No way!”  His bandmates were adamant in their agreement, reminding me I was pregnant.  So I just watched the celebration through Dempsey’s plate-glass windows.

We planned to name our first child, if a boy, Mason for my father, and if a girl, Victoria for Virgil’s mother.  I continued working at Western Electric until sometime in March, even though the birth was not due until April.  But during the late morning of March 22, I passed blood, and Virgil took me to Roosevelt Hospital in Manhattan.

Just after the stroke of midnight while I was anesthetized with ether, Mason was born weighing 7 pounds.  Virgil was so excited he telegrammed Daddy and Mother at 1:35 am, and the teletype operator must have been too because he typed the year as 1942!

Ten days later, a standard time then for postnatal care, Mason and I were ready to be dismissed before noon, but Virgil did not arrive until late afternoon.  We went home to a darkened apartment to discover there was neither food for supper nor milk for Mason’s formula.  I waited impatiently as Virgil went down to the deli to get hold of necessities.

Unbelievably, at 5 am the very next morning, Virgil packed a suitcase, leaving minutes later for a tour on the road in New England.  Three days later, a visiting nurse came by to check on us.

Seeing her at the door, I burst into tears, sobbing uncontrollably.  For all those days and nights, she was the first person I’d seen since Virgil left us.