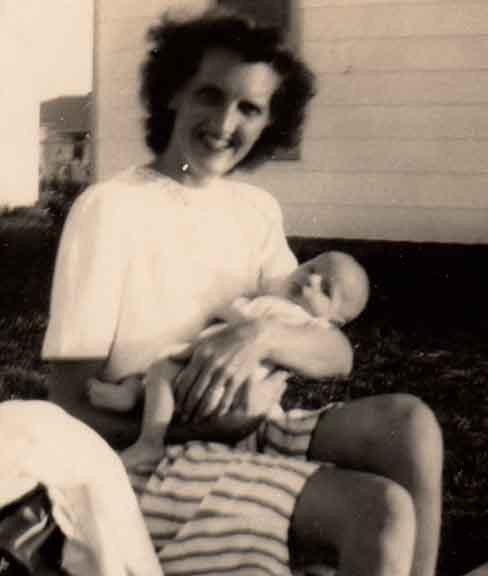 At Thanksgiving 1947, Virgil took on more music jobs, getting gigs as a trombonist with big bands visiting from New York City.  He worked nights, sleeping days, and I began work at a daycare center in a northwest Miami development built for defense workers during World War II.

One hundred children ages 2-6 were separated into four groups, being housed in a modern, appropriate facility.  The head honchos there were Nichols and Johnson, two openly gay women who employed four certified teachers, two aides, a housekeeper-maid and cook.

I was assigned one group of kids for 30 minutes, for whom I played piano so they could dance, sing all sorts of songs, and play singing games.  Wow, that was fun.

During Christmas, I realized I had conceived a third time, and Dr. Purdue, the head of gynecology-obstetrics at Jackson Memorial Hospital, became my prenatal doctor.  I continued my work during the morning hours until I went home to make lunch for Mason and Jon.

In January 1948, Virgil began doing IRS tax returns for musicians, which I typed up on an old Underwood.  And in the spring, he found out about an FHA development in Hialeah, and successfully made arrangements for us to move into our own house at 810 NE Third Place in Essex Village.

Our own house!  It had three bedrooms, a large combined living-dining room area, kitchen with all appliances and a Bendix washing machine on the back stoop. Built of Dade County pine (of which there is no more), our development may have used the last of it.

That wood was termite-resistant and became so hard with age that it became really difficult to drive a nail into it.  More than 20 years after we moved away (in the early 1960s), the whole neighborhood still stood, taken over by the Cuban immigrant population once Fidel Castro seized power, with nicer landscaping than when we moved in.

On Friday, Sept. 17th, Virgil picked us up and took me for a scheduled exam while the boys waited in the doctor’s office.  Dr. Purdue announced I had dilated and asked if wanted to give birth this very afternoon or wait until Monday.  I didn’t know I had a choice!

The doctor sent us to a nearby pharmacy so I could receive a large dose of castor oil, Virgil drove us home to pick up hospital odds and ends, and we then went straight to St. Francis Hospital on Miami Beach.  At 6 pm, contractions began and three hours later, Robert Christopher Loika was born.

I remember there were no bottles available, but no worries.  I was still nursing “Bobby Chris.”  We had endured three hurricanes during his first month on Earth.

The photo at the top of this page shows Thelma Johnston Loika holding 1-1/2 month old Chris in early November 1948.  Below is an old photograph of Mason and Grace Johnston surrounded by their three daughters, two sons and one grandson.