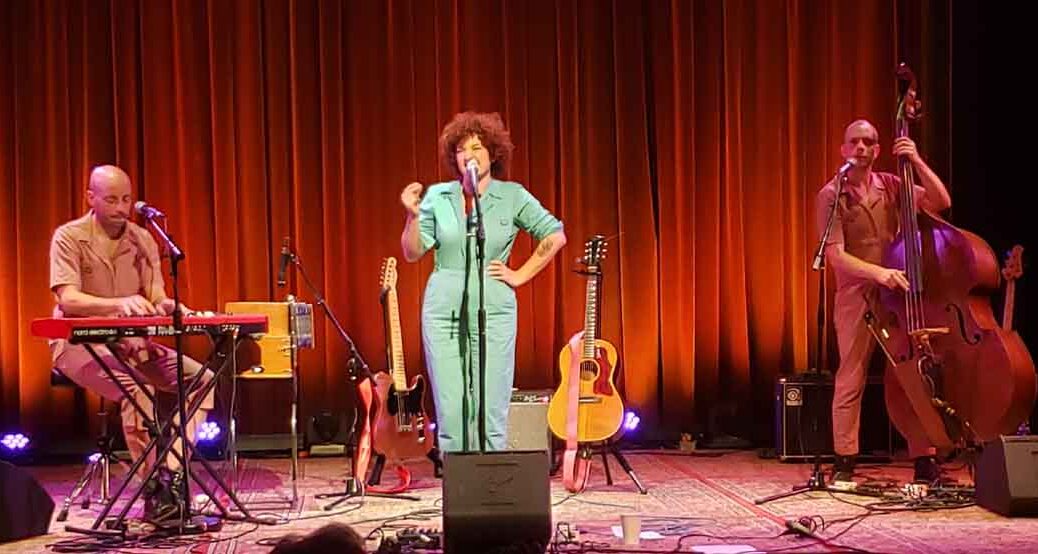 I honed my talent in Bucks County, Pennsylvania, covering and reviewing top-drawer musical acts for the Bucks Count.y Herald. I became recognized in that hallowed community as a unique, reputable voice covering the music and art scene.

One major omission in my coverage, though. In 2012, a Doylestown, PA resident invited me to his home for a house concert featuring a professional folk artist constantly writing new material. What I heard was an amazing bundle of energy dedicated to the off-center writings of legendary artist John Prine.

Her name: Carsie Blanton, who appears to be following in Prine’s footsteps. I never wrote about her then, but I am writing about her now.

Blanton has been touring over the last 10 years, with the latest soul-draining tour ending Sunday night, November 20, in Seattle. A night before, she performed in Portland, which allows me to pen some overdue coverage.

Blanton is a true Philly troubadour capable of writing a myriad of songs, some with engaging hooks. She seems determined to give her talent a classical musical presence. That’s apparent from the sound created by two geniuses masquerading as side musicians: Joe Plowman, a Philadelphia area bassist, composer and teacher, and electronic music wizard Patrick Firth from Rockaway Beach, NY.

Assembled together, the musical trio succeeded in completely resonating the Alberta Rose’s 400-seat theater. Plowman amplified his stand-up bass so thoroughly he rumbled the walls on one end of the building’s stage. (His electric bass sounded good, but nothing like the stand-up instrument’s richness.)

Meanwhile, Firth tickled the ivories of an electric piano to test the treble range of one’s hearing on the other side. His ancillary performance on an adjacent harmonium, which looks more like a stand-up accordion with bellows, captured music-lovers’ fascination.

My ears, along with Carsie Blanton’s, of course, never had it so good. Her music filled the room with effortless verses containing challenging tonality, a chorus working up to high notes, and a peculiar message adding unexpected humor.

Blanton still works her audience to raise recognition for music online, and patrons are asked to request specific songs on Spotify. The music business has changed, not so much for the better these days as performers selling CDs after performances are vital to keep musicians’ tours solvent. A flawed appearance on Public Radio’s “Mountain Stage” tops her list of lost opportunities. The performance I heard on Saturday night testifies to the outstanding efforts of working musicians.

What about Blanton’s long-held anti-establishment message? Well, the intensity of her philosophy is likely to change. On the present tour, a one-night performance in San Francisco suffered a vehicle break-in, affecting the band’s instruments and gear. This kind of thievery is prevalent on the West Coast, perpetrated by well-organized criminal enterprises operating out of homeless camps. Nevertheless, without all their original equipment, Blanton’s entourage prevailed with a spontaneous, well-received performance.

Another Philly musical artist, Brittany Ann Tranbaugh, appeared prior to Blanton, entertaining a near-capacity crowd for 25 minutes with unexpected musical twists and turns prior to Carlie’s show.

Blanton comes from a world of mountain greenery, quite a bit different from Pennsylvania. She lives the life of a folk artist who emanated from the town of Luray, Virginia, not far from world-famous Luray Caverns. And she speaks her mind onstage, almost transparently. Accordingly, you don’t have to travel too far to know how this particular mountain entertainer with curly Angela Davis-styled hair expresses herself.

Through an old adage, “You can take a girl out of the country, but you can’t take the country out of a girl.”

Carsie Blanton’s next tour is scheduled for mid- and late-April 2023 with performances in Washington, Philadelphia, New York and the Northeast. More details on her website: Shows | Carsie Blanton