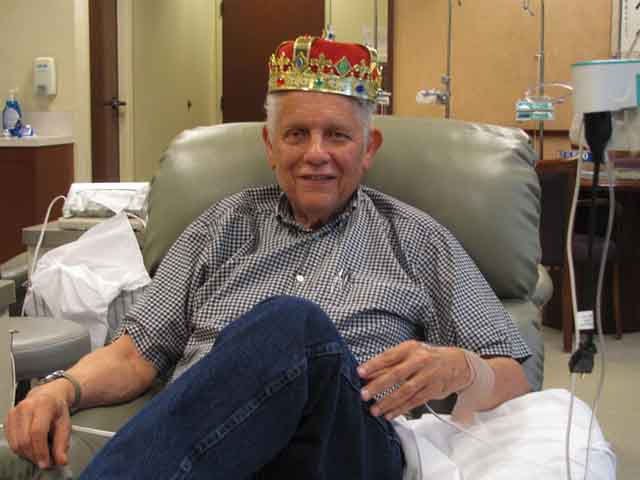 I survived four rounds of chemotherapy without one bout of nausea.  My oncologist, Dr. Daniel R. Gruenberg, observed that I endured chemo better than 95 per cent of other patients who undergo the same cancer-killing infusions.  Score one for the Loika and Johnston genes!

What lies ahead, though, is a surgical date with urologist Dr. Daniel Janoff, ostensibly in mid-November, to remove my bladder and prostate.  A second opinion with a different surgeon seems to be all that lies between consciousness and a scalpel as I cross my T’s and dot my I’s.  What will life be like without the essential tools of procreation?  What will the effect be on my creative spirit?

Bladder Surgery, Cannabis Oil or Both?

Alice is opposed to the surgery.  She monitors my daily intake of cannabis oil, reputed to keep cancer cells at bay, in hopes I will change my mind and follow that approach instead.

I disagree, even though I have more questions than answers.  Sufficient evidence is being gathered that documents what Alice has learned: Cannabis oil helps fight cancer, but marijuana remains nationally labeled by the Drug Enforcement Administration as a Schedule 1 substance.  Because it’s been so vilified by law enforcement, in vitro observations in the laboratory remain the only medically factual evidence.  Sufficient data must be gleaned through future human trials to learn precisely how much cannabis oil is needed to keep a high-grade cancer at bay.

The future suggests more-informed treatment options will be available for the next generation.  In the meantime, though, I suspect my bladder’s integrity is compromised beyond repair, and enough successful bladder-removal surgeries have been performed that the prognosis is good for me to aggravate the world for years to come.

But isn’t it a bitch to know my cancer was caused by chemicals added to American tobacco products to make cigarettes addictive, but such deadly tobacco products are still legal to purchase over the counter?  Whenever I see a sizable segment of the population huff and puff cigarettes here in Portland, I shudder at the future human cost.

In the meantime, how many lives have been trashed through the enforcement of archaic marijuana possession laws that incorporate “Reefer Madness” propaganda into a ban on love, peace and happiness?  DEA’s diehards dispute current scientific studies with the same fervor as climate-change deniers.

One great thing about living in Oregon: Medical and recreational cannabis is legal here.  Also, I now possess a valid Medical Marijuana Card.  That means my consumption can be discussed openly.

You might notice from recent photos that my hair has thinned considerably, although Dr. Gruenberg promises it will return.  Because I prepared for bouts of nausea, without any occurring, my weight is up 15 pounds!  Where’s the irony in that?

Local farmers are perfecting the process to completely remove THC from cannabis, because it’s been found to be a legitimate pain reliever.  But more data is needed to let cancer sufferers make informed alternate decisions that avoid surgery.  And I refuse to consider radiation.

In the meantime, what about Alice?

The woman who accosted me romantically six years ago is doing fine, but tremendously bored.  Some aspects of her stroke, though, have become a godsend.  Because of those invested in her therapy, as well as fellow couples comprised of a stroke survivor and caregiver, we occasionally encounter people who deal with the same issues.  Most of them are well educated and a joy to be around.

We met a few of those at Alice’s aphasia camp that we attended on the Oregon coast the last weekend of August.  In addition, while Alice took a nap, I sat in a rowboat while two nubile physical therapists took over the vessel using muscle power and shoulder grease galore.  Should I feel ashamed to accede how idealistic, determined women can flaunt how much they are in better shape?  Before we left the dock, I bragged how well I could row, but I proved useless.

Alice Steers ‘Betsy’ Into a Pole

One last piece of news: Alice tore up our Ford Escape’s right-hand front panel against a two-foot-high yellow pole to avoid a tractor-trailer swinging its load wide.  For six days, our Ford Escape has been sitting in a repair shop waiting for The Hartford’s adjuster to approve its own surgery.  It will take a couple weeks before I can Uber again, so Alice and I are pinching pennies accordingly.

In the meantime, I can use this time to sit in front of my computer and write.  This post on my blog is long overdue, and I thank everyone for being patient while I find my writer’s cap again.

Pragmatically, I feel guilty about not making money to pay all the medical bills that are piling up, but I feel emotionally satisfied that I can renew my former identity as an author.  Who can say what the future will bring?