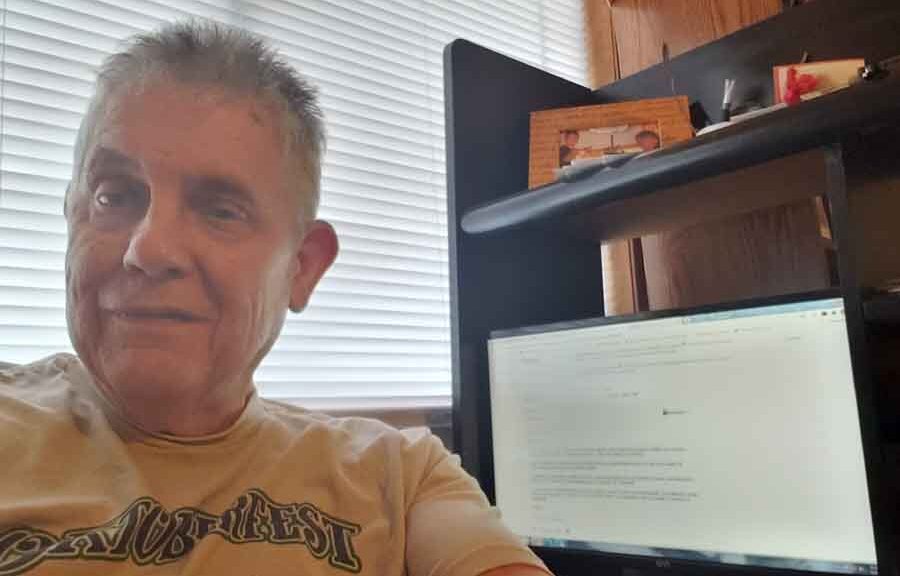 Welcome to my office.

Here I engage in written discourse with those considered to be friends and supporters. Atop the left side of my computer hutch is the same Christmas photo Alice and I mailed out in Doylestown. The red ribbon next to it graces an accurate caricature of Grandfather Many Crows (aka Ed Fell).

Ever since Alice passed over in March, I have lived alone without the benefits of what a partner offers. If it’s the wrong kind of partner, being by oneself can be a relief. But with dear Alice, it was being part of an entity that told me when I was being an asshole, and when I was living up to our aspirations.

I miss those moments.

Two and a half weeks ago, I was sitting where you see me above. I shifted my weight from the middle to the left side of my hip, encountering a sharp jab of pain, so severe I drove myself to the emergency room two nights later with worries related to past cancer surgery. Fortunately, X-rays and a CT scan showed nothing serious or suspicious, and today my Kaiser Permanente medical team is keeping on top of my problem and its expected pending cure.

Nevertheless, I am hurting until this malady is permanently treated. And I’m doing so alone.

A few words about Kaiser Permanente: If you judge quality of care by the ratio of patients to primary care doctors, you will be misled. From my experience in the Pacific Northwest, front-line doctors serve as intake experts to a damned good healthcare system. Doctors regularly interact online with a range of specialists, overseen by a cadre of behind-the-scenes physicians who check and double-check. No one slouches or goofs off at medical facilities here. This is 5-star healthcare.

I’ve experienced healthcare in South Florida; much of it is corrupt, and its healthcare workers have become sadly cynical. And up North, specifically Bucks County, Pennsylvania, while recovering from a punctured bowel in the highly regarded Doylestown Hospital, I would not have survived without a visit from a well-respected sculptor named Harry Georgeson. He singlehandedly alerted a matter-of-fact weekend nursing staff of my critical sepsis, who then came running and moved me into the ICU in minutes.

(I remind Harry on occasion that he’s responsible for keeping me around to annoy others.)

When medical people visit the Pacific Northwest, experience the majesty of its landscape and meet prospective peers, they fall in love with the place and the quality of healthcare that mirrors the glorious outdoors. My brief three-hour experience during the midnight hours in Longview, Washington’s PeaceHealth Hospital met the same high standards as Alice’s three times there, including one stay of eight days. Not one healthcare worker whom I came across showed indifference or boredom in the midst of a demanding overnight shift. Everyone was on high alert.

Despite my travails, I am still working on the book with two esteemed volunteers from Alice’s aphasia support group. But I’m also making sure my cuisine options remain plentiful, 95 percent of which I prepare myself. And having a dishwasher, washer and dryer, as well as a splendid view, keeps life personably manageable.

But getting back to this hip thing? It’s painful enough that I’m welcoming – and fearing – the thought of the long needle I would have to stare down soon. The way I feel, it can’t come soon enough. 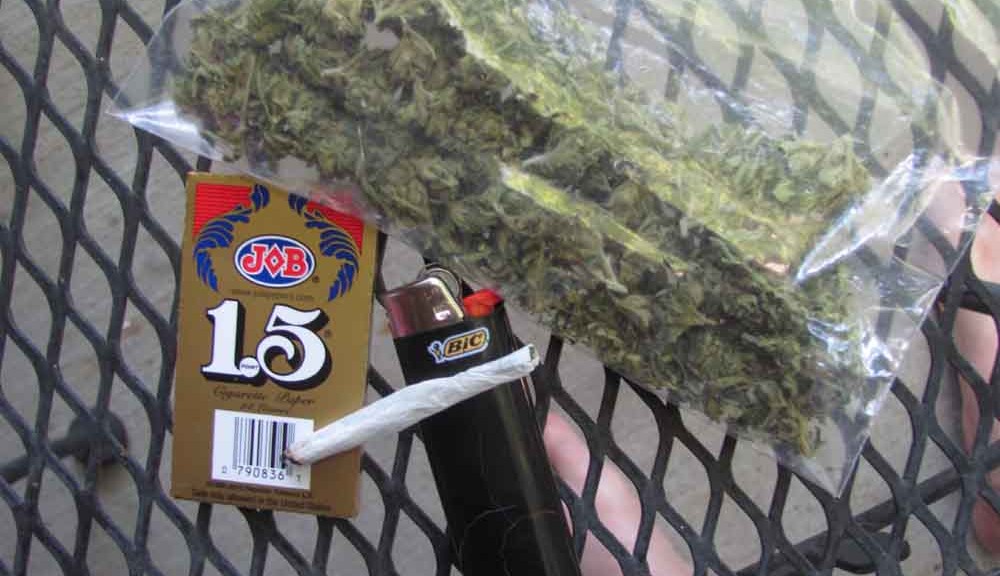 On July 1, marijuana became a legal recreational substance in parts of Oregon, and the sky hasn’t fallen in Portland.  The city is calm, and drug addicts are not running amuck.

That’s because none of the alarmists’ worries about legal weed drew more than a collective yawn from Portlanders.  The only newsworthy observance took place at Portland’s Burnside Bridge as the clock struck midnight on July 1, mainly because the Oregonian newspaper encouraged a crowd of mostly well-behaved people to partake.

Portland is not the city of stoners that out-of-towners might assume it to be.  Walking the hip streets at different hours allows plenty of opportunity for Alice and me to witness the sight or scent of wacky tobaccy.  In over nine months here, we’ve seen nary a toking soul.  Whatever pot use there is occurs in private.

Pot sales still are banned, too, at least for a few months.  The only legal way to transfer wacky tobaccy from one person to another is via gift or trade.  An enterprising event called Weed the People took advantage of a legal loophole Friday by charging an admission of $40.  Once a ticket-holder had entered its small venue, the salivating stoner could walk up to tables and meet enterprising suppliers who gave away samples of their products.

A small area was set up outside to partake, where outsiders were blocked from view.  There, fun-seekers sampled newly acquired goodies, easily exceeding a fair-market value of $100.  The relatively bargain price of admission and publicity given this quasi-public event encouraged an estimated 2,000 people to jam a modest-sized venue in North Portland.  A bond was struck there between sellers and purchasers.

Alice and I did not attend; instead, we were making our presence known inside the four-day Portland Blues Festival in downtown’s Tom McCall Waterfront Park.  Blues fans were instructed not to bring marijuana into the park.  Nevertheless, I expected to see or smell somebody’s newfound pot-smoking freedom.

But no, not one whiff.  No passing around of joints.  No smoke wafting from the peanut gallery.

Such a muted celebration typified the crowd response to Gregg Allman’s band on opening night: tepid.  Only after a full moon rose through the two decks of the nearby Interstate-5 bridge over the Willamette River did the crowd begin to shed its apathy.  Have Portlanders become jaded over the city’s reputed weirdness?

The newfound legalization finally was drummed home to spectators on Friday night.  While adding a well-practiced rhythm and blues influence to New Orleans funk band Galactic, Macy Gray sought to wake up the beach-chair crowd with a new song, “Stoned.”

Gray inspired vocal approval, but only after urging members of the audience to raise their hand if they had a good experience from being stoned.  About half the audience did so, giving Alice and me – finally – our first tangible evidence that Portlanders embraced the practice.

But Gray seemed annoyed.  The folks in attendance had earned this legal freedom by living here.  Why were they so blasé on Independence Day eve?

Gray ratified my own observation.  Portlanders disdain partaking cannabis publicly.  Smoking weed here is entirely a private ritual, and the old days of passing the joint seem destined to go into a time capsule as a throwback to the “good old days.”

Portland stands to benefit mightily from weed’s legalization.  The Rose City is the first destination allowing legal marijuana where airline passengers are transported effortlessly between the airport and downtown without ever stepping foot in a rental car.  The Max – light-rail transport – is the new-fangled futuristic vehicle to move newcomers around with some of the regular folk.

The only safe, yet legal, way for people visiting Portland who intend to partake in Oregon weed is to avoid driving.  You can take the Max (also known as Tri-met) from the airport, but know the Uber scene is all the rage.  You can let authorized operators of the economical ride-sharing service follow the rules of the road and give you hands-on treatment.

And know that somewhere, somehow, a group of musically adroit visiting celebrants will pass a joint around in this part of the USA to acknowledge that prosecuting pot smokers is no longer a priority.  It goes beyond political correctness; it’s the right thing to do.