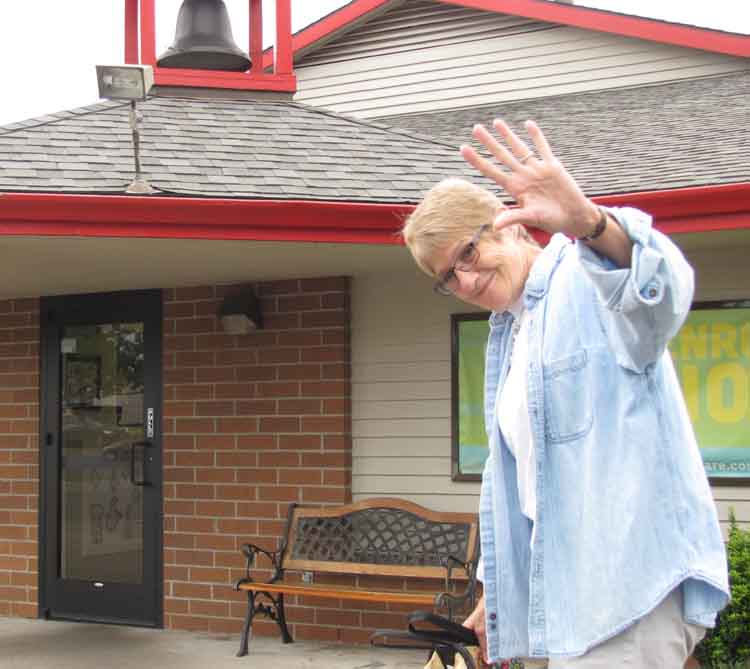 I should have seen it coming.  After all, Alice waited only one month before showing enough confidence to go driving alone – without my permission, if you please – after a full-blown stroke on March 11th.

Sure, I was worried, so I wrote about it.  The responses I received from some of you, though, praised her willingness to assert a free spirit.  Others were more guarded and even identified with my fear.

Nevertheless, it’s easy to underestimate Alice’s abilities because of her speech aphasia.  I think my late Grandma Johnston – even my mother – would have been fond of Alice’s “gumption.”  So being outvoted by the ghosts of family mentors, especially since Alice would not surrender her keys to the Ford Escape, I went into an author’s solo tantrum.

Two weeks later, when Alice drove off again to get her hair done, I gritted my teeth and withstood it, looking at my watch only 50 times (or was it 100?).

I was uneasy, oh yeah.  But I already admitted on this website that I have a controlling nature, so I did not make a big deal about the second drive.  Alice’s speech aphasia is improving bit by bit, although at times when she gets hung up on the same word over and over, it’s tempting to assume her frustration is directed at me.  That’s when I get depressed and insecure.

So on Friday, May 8th, two days before Mother’s Day, Alice drove off again to buy herself a pair of sneakers, and I tried to find other pursuits to keep from worrying – and consequently avoid getting Alice pissed again.

Well, after Alice bought a nifty pair of sneakers, she hopped into ol’ Betsy again, not telling me where she was going.  I began pacing our apartment from one room to another, wearing a path in the carpet.  I kept the cellphone in my shirt pocket, preparing for the worst, until Alice showed up an hour later.

She sauntered in with a smug expression.  I tried to appear matter-of-fact, until Alice said, “Well, I start work on Monday.”

Alice explained that on the spur of the moment, she drove over to KinderCare’s location – half a mile from our apartment – where she worked before her stroke.  For the last two weeks, I had been whining about our dwindling resources, but wasn’t this an overreaction?

Not really.  Being cooped up in this apartment with me can get to be a little rich, so she sought relief.  And when I think about it, Alice speaks as well – better, actually – than the toddlers and infants for whom she cares, and her love for those kids plus their love of her culminated in this good news.

I guess we can call it lovingly a stroke of good luck, as the photo above shows.  Alice reluctantly waved, “Bye bye,” for the camera on the first day she again found refuge with like-minded caretakers.  As I write this, she’s back minding kids and toddlers – in close proximity of fellow employees.

Alice is nothing short of amazing.  How could she possibly top this?

7 thoughts on “Alice Goes Back to Work”